Christmas night for many will be spent dozing in front of the TV with one hand in a box of Celebrations and no plans to do anything taxing for the new few days. And after the busiest time of year for the dancers of Diamond Dolls, they will have earned this time off more than most. 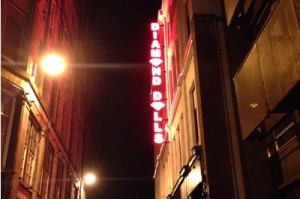 Months ago, on a night out in Aberdeen, I met Lisa. Lisa (not her real name) and I were the same age and began chatting and buying each other drinks, swapping stories about what we liked and didn’t like about our jobs, our love lives and our career aspirations – the usual 2am repertoire. Thing was, Lisa was working when we met, because she was a dancer at one of Aberdeen’s lap dancing clubs.

Interested in her job I asked for Lisa’s contact details, as, I explained, I was keen to do a feature about her line of work coming from an angle where instead of postulating about a dancer’s assumed traumatic past or exploitative boss I heard directly from her about what it’s like to work at a club. Keen to share her thoughts on the matter, she gave me her number.

Three months later, I called Lisa. She didn’t answer, so I texted her with the outline of this feature. But I never heard back. I tried another contact who I knew to either be currently dancing for a club in Edinburgh or who had recently hung up her heels. But she wasn’t interested either. Yet I still thought it important to explore a job that superficially seems so incongruous with the nostalgic notions we associate with Christmas, and find out how a dancer might be working this time of year, though I appreciated that some would be unwilling to talk because of preconceptions others held about their work. So I called a friend working as a promoter for some of the biggest clubs and bars in Scotland – one of which was Glasgow lap dancing institution Diamond Dolls.

ALAEVS wholeheartedly supports International Woman’s Day 2019. The future is exciting. Let’s build a gender-balanced world. Everyone has a part to play – all the time, everywhere. Balance drives a better working world. Let’s all help create a #BalanceforBetter.